The only similarity can currently be found are the costume parties, especially among adults. 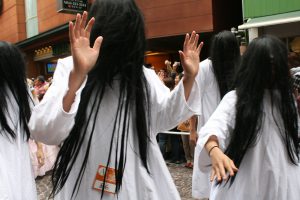 While Japan has embraced the culture of American Halloween traditions as far as costumes and haunted houses are concerned, there are still some customs that are mainly done in America such as “Trick or Treat”.

“Trick or Treat” is the tradition where children (and as of recent, teenagers) along with an adult chaperone, go from door-to-door in their neighborhood or town, and ask for candy. The children simply ring the doorbell, say “Trick or Treat”, upon which the people in the house give them candy and other treats.

Children can either use bags with traditional Halloween decorations, or pillow sacks to increase their stash. Though “Trick” isn’t done as often, it implies that if the children are NOT given candy, then they will get their revenge by playing a prank. (Not so much when I grew up–we simply went to the next house).

Trick-or-treating usually begins a little after the end of the school day, and well on into the night. Once the children get home, they along with their parents, sort through the candy to make sure no candy has been opened, poisoned, or otherwise dangerous. After the sorting, the children are free to enjoy their candy well into the end of the first week of November, depending on how large their stash was.

As with other popular holidays in America, especially in suburban neighborhoods, Halloween is a time when house decorations are quite elaborate. While most houses will have the traditional “Jack-O-Lantern” on their doorstep, others will have fake graveyards, scarecrows, and even giant spiders on their front lawns.

The only similarity between American and Japanese Halloween that can currently be found is the costume parties, especially among adults.

Talk to us in Japan on Skype!

We should learn how to solve TOEIC from American

Talk to Japanese Okami-san. Good chance for you to speak Japanese!